To recognize the difference between a truth and a falsehood is sometimes as easy as distinguishing white from black; we can discern patently opposing principles with unequivocal clarity. At other times, the truth seems to reside in a field of grey, muddled by the subtleties that are conditioned by the blurry nature of what we call ‘ordinary reality’. The seemingly slight contrast between the artistic utilities of sentimentalism and pathos, for example, is a striking instance of such a confusion, one which we will hereby endeavour to properly sort out.

The first apparent category that we can appropriate in defining sentimentality is its intent in expression, i.e., what it hopes to accomplish in its artistic manifestation. What often characterizes bad ‘art’ is not really its passion or strength in feeling (which is admittedly quite genuine a lot of the time) since artistic merit is not earned by some semblance of emotive conviction alone; rather, it is the type and range of the vision that truly demarcate the borders between a mediocre effort in self-expression and the faculties of real imaginative power, so the many failures in the various art forms will ultimately derive from a deficiency in this so-called ‘vision’.

Because a clearer definition of what we mean by ‘vision’ will be given later in this article, it will be sufficient for the present to say what vision is not, which is precisely where bad ‘art’ takes up residence. Whatever the individual case might be, whether the artist hijacks an idea already solidified in the canons of art history while attempting to market it as something ‘fresh’ and ‘contemporary’, or whether he dives into the proverbial deep end in some cosmic search for an entirely unique form of expression, his ‘vision’ derives from the same source: his own personality, the peculiar narcissism that plagues all artists whose eyes are not accustomed to the dark mysteries of the inner aspect of reality.

The source of all sentimentality is expressed in the myth of Narcissus and Echo wherein the handsome swain discovers his own ‘emanation’ not in the darling face of his sexual opposite, Echo, but instead in the false image of himself provided by his reflection in the water. An ill-equipped artist is likewise locked in combat with his own furious desires for self-expression; he can only see himself in the water (the full ‘success’ of his expression); he is unable to lift his head and gaze beyond his own selfish pursuits, which means that he will never behold the lovely face of Echo, and will therefore never behold the face of true beauty, which, as we will see, is necessary for the greater types of art to be invoked.

When the source of something is clearly delineated, it follows that its effect should be similarly transparent. Because sentimentality derives from the limited faculties of self-expression, and its substance is not really grounded by anything but the subjects’ own experiences and temperament, the discriminating judgment of a trained observer will reveal this particular artwork to be ‘weepy’ and ‘unfocussed’, with a definite tendency towards popular appeals, towards the lower fascination of man. The demonstrably individualized aspect of the piece in question actually forces itself outside the beautifully universal domain of higher art because it is simply another man’s opinion, another isolated perception that lacks any serious connection with the greater order of things.

A final consideration in regards to the nature of sentimentality leads us to dwell on the object of what a typical sentimentalist directs his attention towards. If we understand love (and, by extension, the creation of art) to be an undertaking that is fundamentally directed outward, and again if Narcissus is merely focussing his affection towards himself, we can very probably acknowledge sentimentality to be a kind of ‘false love’, or at least that the object of which is something that is in some way unreal, or perhaps simply undeserving of such indiscriminate and idolatrous attention. Many of the Romantics of the 19th Century, for example, were sentimental in their passionate thirst for the vibrant chaos of nature, of idyllic landscapes beyond the ‘poisonous’ influence of mankind. The object (nature) is worthy of love, to be certain; it is simply the extent and the singularity of this devotion that marks the movement to be comprised largely by sentiment and misdirected feeling. To extrapolate the metaphor further, the sentimentality of ‘nature worship’ is noticed as such if we deem its action to be an escape from the normality of God, of human civilization, and of the recognized order of our own species; it is therefore a myopic search for oneself in the water, nature’s wavering and evanescent mirror, and a stubborn refusal to so much as pay a glance to an adoring Echo, the everlasting mirror of man.

In creating and understanding art, as in all good and holy things, the only essential faculty required is that of vision: everything else will fall into its appropriate place in an almost ‘accidental’ manner so long as the vision maintains its depth. This is the act of not only seeing the desired objective, the thing that must be created, but it must also be the act of connecting the vision to something ‘intelligible’, or a universal fact that will give the work of art the breadth necessary for it to truly belong to a class of art that is not merely ‘personal’ or exclusively sentimental.

We have admitted that the quality of art depends upon the extent of its perception. If the perception in question reaches no further than giving a petulant expression of a man’s own pursuits, then it is clear that, in being unable to see beyond itself, to see how its experience accords with something beyond its experience, his faculty of perception must be very dim indeed. There are things that are beautiful, and these are things that are real; there are also the shapes of things which are ugly, and these are therefore the properties of ignorance and of the lower levels of ‘Maya’, or ‘ordinary reality’: the vision must be concentrated upon something that is indisputably , incontrovertibly real not only to the seer himself, but to some kind orthodox objectivity that bears the highest doctrines of what is real. It is the faculty of vision that either lifts us to these golden planes of reality, and thereby enables us to transmit them through the purest medium of art, or which takes us into a murky labyrinth, a spiraling maze that will have us forever turning in circles.

Now, warming up to the central issue at hand, the beauty of tragedy is disputed by those who would bring it down to a travesty of sentiment and milky feeling; in our case, the reality of sorrow is that it is a reality, a thing that is beautiful and good. Insofar as we can have a healthy vision of the tragic, we have a justifiable means available that allows us to submit that tragedy to material expression, and the means to do so is called ‘pathos’, the act of evoking a deep sympathy, a visceral experience in the witness. What made the old Greek tragedies so artistic was not what made Homer so artistic (mostly because Homer did not write from the Trojan perspective); the heroism of the Iliad and the reverse serendipity of the Odyssey are the focal points of their respective epics while it is the great loss of Cassandra and Oedipus that decides the high quality of Aeschylus and Sophocles; it is so simply because the trial of suffering is not any weaker than the trials of courage and adventure; infact, if we are to believe Aristotle and Schopenhauer, the trial of suffering is actually stronger.

While the compendium of Grecian drama may hold no great source of confusion between sentiment and pathos, it is a little more difficult when we come across something like Goethe's ‘The Sorrows of Young Werther’. This little book confronts the crisis of an enormously passionate love for someone who pays mere friendship and goodwill in return; it is almost a stream of consciousness in the way that the narrator continually oscillates between dying romantically in the heroic pursuit of woman and the problematic attempts at moving on in life. While there is doubtless a fair amount of sentiment expressed between the covers, it is ultimately subjugated to the higher schema of an energetic, youthful passion coupled with facing the impossible; the sentiment is but the significant emotional ‘residue’, as it were, a remnant from the collision between a hopeful dream and the cold stone of reality.

This is an example of not only how to detect the natures of sentiment (the more immature aspects of passion) and pathos (the truth of tragedy revealed), but also how they complement and work with one another, which is why they are often so difficult to separate and distinguish. So, the youth and selfishness of a particular phrase in music can be deemed quite good and proper if it is preceded or followed by a deep, dark melody that envelops the art with the sober quality of suffering and tribulation; the artistic vision dictates a final absolute, but the means toward reflecting such a thing may arrive in any which shape, in any which colour.

It is a truth that most of the higher expressions of art have contained some semblance of tragedy; infact, given the state of our fallen world, we should think that it is the beginning of every heroic  text, every symphonic composition, for all good poets and all good composers begin by going away from the imperfections of ‘ordinary reality’ and end up creating something that is far more whole and far more real than what our eyes, ears, nose, or mind may ever experience; it is only the bad ones who consider ‘ordinary reality’ worth imitating, and their creative efforts are inevitably the ones that are overrun by arrogant mockery, useless allegory, and repulsive sentiment. By way of conclusion, we repeat: the quality of art begins in the vision itself (i.e., is what I behold Good), and it ends in the connection between the vision and ‘ordinary reality’ (i.e., is what I behold properly reflected in my work); the strength of every artist resides in the mutual co-operation between vision and praxis, and we can unfailingly discern the depths of such an alliance once we come to realize the higher and lower properties measured in art; once we come to discriminate between the complaints of a childish sentimentality and the heroic struggle of a pathetic tragedy. 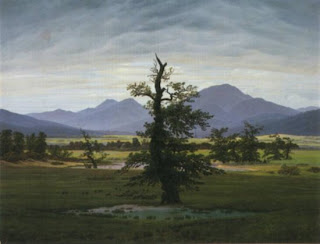 Posted by Maximus Meyer at 10:41 PM No comments: Links to this post