If we understand We’re Here Because We’re Here to be an experiment in exploring life for the first time without being suffocated, existentially blinded by grief, loss, and a deeply personal ennui, Weather Systems is its sequel, its natural successor; Weather Systems represents the evolution of We’re Here… into the next stage. Having made way for a novel perspective full of joy and boundless energy, ready to discover the world anew, the old angst and expressions of emotional helplessness are either transmuted into a different kind of struggle, as we will explain below, or they are absolutely absent. Unlike many of the earlier albums, which dwelt on the pathetic strife of a man weary of the world and of existence itself, the purpose of Weather Systems is to portray the healing of that bitter soul, to portray his re-awakening into a universe which has at last captured his imagination, his youthful wonder, and simply his will to live.

The central dynamic in Weather Systems, which is elaborated further on this than on any one of their prior albums, must be the lyrical exchanges between the male and female vocals, each presumably representing a distinct ‘character’, as it were, since this record does play out very much like a kind of (mostly) non-linear drama. The male character, who is obviously the centre-piece of the narrative, is, in spite of his rejuvenated spirit and renewed thirst for life, still a man lost within himself; he has the peculiar problem of possessing an internal vision, a powerful vision that he desperately wants to see realized in tangible reality. While there are numerous references to dreams and extravagant poetic metaphors, the clearest, most basic example of this vision is the protagonist’s persistent belief in his overwhelming love, his unfailing capacity for this extreme devotion, something which cannot be returned in his life, or at least not his mortal life.


The counterpoint of this narrative is performed by the female character; whether she represents the protagonist’s beloved, some kind of angel or muse, or something else entirely is more or less irrelevant, and this is because her function can be played by any one of these (we are personally inclined toward the view that she is the beloved sublimated into a kind of spiritual presence, like an angel or muse, although this cannot really be substantiated). Now, the nature of her function is as a guide, a spiritual voice that seems to be part of the protagonist’s own psyche, someone who is comprehensively internalized; the task of her function is evidently to assist the protagonist as he struggles to remove the surviving shackles of his prior imprisonment, to help him let go of his enduring love which only causes himself pain, and finally to show him how beautiful life is when you view it in its essence, not unlike Beatrice in the Paradiso. We hear our friend reaching, calling out that he is lost, and his guide reaches down, and benevolently responds, ‘Our world is so wonderful, so beautiful; if only you could open up your mind and see’. We can determine that, at this point, the male and female voices are really one being conversing with one another, and that perhaps the final resolution will see them joined together in body and spirit as in Plato’s Symposium, or Blake’s Jerusalem.


With a poetic narrative of this quality, of this high-calibre, it is almost as though the music itself is merely a secondary instrument, even if this is nowhere near the truth. While obviously the music on an album like this is constructed to support the lyrics, it is nevertheless of the highest importance, and we can illustrate this allegorically. If we imagine the content of a poem apart from its form, it will appear as a series of dialectical points (at best),  a cascading array of ideas presented via purely argumentative means with no ornamentation or metaphorical power whatsoever to provide the necessary aesthetic rhetoric; it will, in other words, be as unreadable as Kant’s Critique of Judgment is to the unwitting layman; it would, in other words, be a poem without poetry, an oxymoron if ever there was one.

More specifically, the music of Weather Systems fulfils its role supplementing the story exactly as imagery and meter supplement Paradise Lost. It does this principally through an enormous evocation of melody, with soft, dancing guitar lines infiltrating every verse, pushing it up to further improve its dramatic feeling. The rhythm is motivated by an atmosphere that is at times pulsing and heavy, bearing the weight of a storm, at other times light and airy, allowing the imagination to wander in the vast spaces of the ether. So the music not only captivates and epitomizes the very title of this album in its work, flowing sensuously along with all the eccentricity of the weather, but it more importantly organizes the lyrical exposition into a series of natural symbols that characterize the narrative as something continuous and wholly seamless as a union of poetry and the music that brings it to artistic life. The listener is impressed by the sonorous imagery, the bold, unwavering symbolism that catches every dramatic moment in its heavy embrace; in a word, it synthesizes the pathos of the lyrics with the expressive soundscape imposed by the atmosphere: when our protagonist is lost in his wandering, melancholic reveries, the aural ‘weather system’ opens into a broad, elegiac expanse, like a clear night sky illuminated by a bright, brave moon; in the final song when our protagonist finally emerges from his confusion, when the album reaches its climactic resolution, the music metaphorically becomes the full startling power of dawn, the golden rod of Apollo, and the soothing, cathartic breath of the Sun.

To create a brutally over-simplified summary of not only this album, but of Anathema’s story as a whole, we can say that the general plot revolves around a man’s overwhelming love for something, or more emphatically someone, that is existentially and ontologically on the same level as himself; he is filled with a seething desire, and, when this desire is not met or requited, when it falls into the void, we receive this extensive, somewhat bitter narrative that is at once rich in a tumultuous despair and in a dark, desperate search for meaning and for peace. Now, this is where We’re Here… and Weather Systems are introduced, and it is not insignificant that the level of female vocals is enhanced, both in terms of effectiveness and in sheer volume, and the significance derives from the function of the female character in these two albums. While we certainly heard hints of her before, in this or that stage of her own development, it is really only in Weather Systems that her identity becomes relatively clear; whereas the protagonist was formerly involved in a total devotion to someone on the same level as himself, someone who never returned his love, which left him hanging on the edge of oblivion in purely sentimental helplessness, there is presently a voice that calls to him, seemingly from inside and above. She is beckoning him to release that old, dead, infertile love, or rather to direct it upward, to focus all of that frustrated spiritual, contemplative attention towards her, and to hopefully thereby be liberated from the ouroboric cycles of pain he is subjected to for as long as he keeps pouring his affection into the void.  Weather Systems , in its revelation of an alternative, higher path where one’s incessant love really belongs, represents therefore an optimistic meditation, a thesis of eternal love and eternal life, but it also represents a symbolic homecoming;  again, metaphorically, the human soul has departed heaven, concentrated his powerful amorous vitality upon the world which he finds beautiful, and, when his love is unrequited, and he finds that he is just a stranger in a strange land after all, he succumbs to the darker recesses of the world. This is when an angel, his silver Sophia appears, reminding the wayward soul that this wild earth and its chaotic weather systems are finite and completely ephemeral compared to his true home, the ivory palaces of an everlasting Heaven, where we can deposit our most fervent love, our most vivid dreams, and always expect a positive return. We cannot definitively know what comes next in the Anathema storyline, but it would be a fairly safe wager to anticipate an episode which continues on this path to personal gnosis, salvation, and our spiritual resting place!

'It's just so beautiful. It was eternity, it's like I was always there, and I will always be there, that my existence on earth was just a very brief instant... I could say that I was peace, I was love, I was the brightness, it was part of me.' 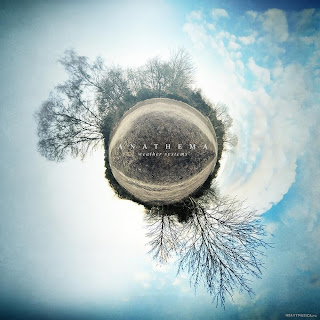 Posted by Maximus Meyer at 11:10 PM No comments: Links to this post