This was the most impressive, the most stirring of the poems found in Boethius' Consolation of Philosophy... In this, the legend of Orpheus who descends into Hades to save his Eurydice from death, we recall also the adventures of Hermod as he strives to rescue Baldr, beloved of the gods, and how he is equally unsuccessful, coming as close to saving Baldr as Orpheus was to saving his wife.

Moreover, we bring to mind that it was only Christ who truly succeeded in His trip to Hell, rescuing not merely an individual, but effecting the nominal salvation of all souls for all eternity. Herein lies an exemplary truth of the Christian religion, namely that it really is the salvific force that has redeemed everything prior, and has made new meanings from already rich traditions of myth & symbol. Eurydice and Baldr were not saved by their pagan heroes - they were saved by Christ, the destroyer of death & the fountain of eternal life. 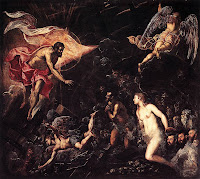 Anyway, Boethius was a philosopher who represented as much as any other the meeting point between the Classical world and the Christian, as well as someone who offered a masterly synthesis of Aristotle & Plato that proved to be a model for high scholasticism. This poem is beautiful in its simplicity, its moving pathos, its illustrious imagery, its philosophic sweetness, but it is particularly notable for its subtle hints at the inner compatibility of our pagan past with Christian omnipresence; the love of Orpheus for Eurydice is undoubtedly potent, and indeed a law unto itself, but the love of Christ is something even more substantial... It is at once the love that binds and the love that frees us from any other law.


Happy, the one who can see
the clear source of good,
happy, the one who can release
the chains of heavy earth.
Once the prophet of Thrace
mourning his dead wife
when with tearful music
he compelled nimble forests to run,
the rivers to stand
and deer joined unafraid
beside the fierce lions
and the rabbit did not fear the sight
of the dog already calm from the song,
when hotter inside
the fervor of feeling burned
and the measures of the one who had subdued all
could not soothe the master,
lamenting the inexorable gods above
he went to the lower worlds.


There by sounding strings
moderating charming tunes
whichever he drew
from the special source of the mother goddess,
which powerless lamentation was giving,
which love bewailing lamentation
the lower world moving weeps
and by a sweet prayer asks
the lords of the ghosts for indulgence.


The threefold porter is astonished
captured by the new song;
the avenging goddesses of crimes
who drive the guilty by fear
next are drenched by tears of grief;
the head of Ixion is not
thrown down by the fast wheel,
and ruined by long thirst
Tantalus spurns the streams;
now the vulture is sated by the music
and does not pull at the liver of Tityos.


Finally 'We are conquered'
the pitying witness of the ghosts declares.
'We bestow on the man the accompanying
wife bought by a song;
but a law controls the gift,
until she has left the underworld
to turn the eyes would not be allowed.'


Who would give a law to lovers?
A greater law is love to itself.
Alas, near the boundary of night
Orpheus upon his Eurydice
looked, lost, fell.


This fable looks back to you
whoever of you into the day above
seeks to lead the mind;
for the one who in the chasm of the underworld
having been conquered has turned the eyes,
whatever special one carries off
one loses when one sees the lower worlds. 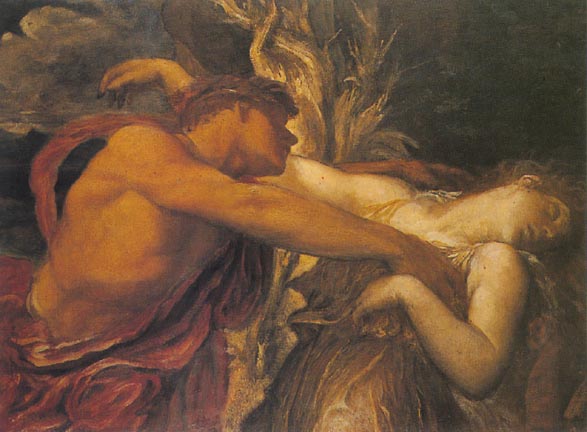 Posted by Maximus Meyer at 7:27 PM No comments: Links to this post