Zdzislaw Beksinski and the Silent Rebellion 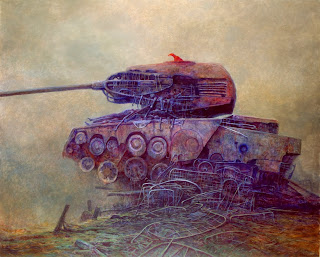 In 1929, Zdzislaw Beksinski was born in the Carpathian town of Sanok in the southeast of Poland. He would therefore spend the later part of his formative years in a Poland divided by war and the Molotov-Ribbentrop Pact, an oppressive atmosphere that inevitably influenced the artist and his work further on. While he would eventually become known primarily for his painting and his photographic material, Beksinski was initiated into the arts by studying architecture at the University of Krakow in his early twenties; those studies only enabled him to become a construction site supervisor, however, a position that he was discontent with, considering its pressures and the associated boredom. As it often happens when any innately skilled artist is being wasted on things alien to his nature, Beksinski left the job and devoted himself at first to photography and sketching before finding his full potential in painting, the result of which shall be the main subject of what follows. Beksinski suffered a dramatic end to his life when he was murdered by a young associate (the son of his caretaker) to whom he had earlier refused a loan.

'It misses the point to ask me what scenes in my paintings “mean”. Simply, I do not know, myself. Moreover, I am not at all interested in knowing.' 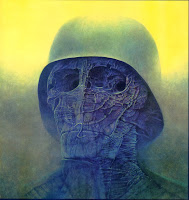 One thing that should be noted from the start is that, as the quote above indicates, Beksinski was vehemently against any single interpretation of his work; in this, he is strongly representative of the 20th Century, which struggled with the emergence of pure subjectivity in art criticism, and the idea that art did not need meaning or formal structure. The fact that Beksinski was not aware of the meaning in his art does not necessarily corroborate the analysis that his works do not contain strong meaning; it is clear that art, especially in the past couple of centuries since the Romanticist era, frequently acts independently of its creator's ideas or conscious intentions. The work says something more than, or sometimes even antithetical to, what the artist himself says. So, Beksinski telling us that there is no reason to ask him for meaning, for the key to his cryptic artwork, is no reason to say that there is no meaning; simply because Beksinski was uninterested does not mean that we have to be uninterested.

The art of Zdzislaw Beksinski so consistently takes on the thematic form of an apocalyptic or post-apocalyptic world because the past hundred years or so, in the wake of art theorist Jose Ortega y Gasset and other radical proponents of modern art and the subsequent dominance of 'post-modernism', has symbolically been a sort of 'apocalypse'; the collapse of meaning and form in art has spawned an infinite variety of different scenes and trends and interpretations that simultaneously assault any conceptual unity that might have prevailed as in previous centuries. Whereas movements like Baroque and Romanticism took several decades and sometimes even centuries to exhaust themselves, the freneticism of the modern mind, the rapid progress of technology and new avenues of artistry, and the ever swifter vagaries of fashion have conspired to invoke a new, different angle and then make it obsolete in about the lifetime of the average automobile. It is a constant oscillation, a steady rise of new and sometimes simultaneous reactions to whatever came before, and this is precisely what the art of Beksinski is concerned with, namely, the creation of a style that is both modern and timeless, a style that both forebodes the end of the present and prophecises the birth of the future. It is said that, despite the bleak subject matter and invariably dark hues, his work is inherently optimistic - and so it is, for what could be more optimistic than the annihilation of a disingenuous and chaotic and totalitarian generation; more optimistic than the hint of the rebirth of an art once again informed by conscious direction and sacred content? 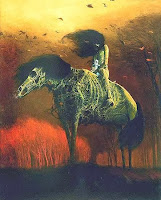 This rhetoric is met nowhere more completely than in Beksinski's 1977 painting, which, in the absence of his own title for it (he never titled his paintings), we will simply call Rider of Rebirth. This work is one of his most obviously apocalyptic works firstly in its dark colours of black and red that contrast agreeably with the pale grey that represents death of the skeletal horse and its (presumably) female rider, and secondly the potent symbolism of the horse and rider, which recalls the Apocalypse of St. John, in which he visualizes the four horsemen of the Last Judgment. The red and orange that constitute the background in Rider of Rebirth imbues the viewer with the knowledge of destruction, of fiery devastation and ruin, while the paleness and the anatomical desolation of both horse and rider suggests the purity and the finality of death. The fact that the woman's deeply black hair obscures her face implies her inhumanity, her frail anonymity. The fact that the small person she is holding is of a bluer, clearer quality is significant in that he is not of the same substance as that which bears or holds him – he is something distinct from the surrounding chaos as well as the deathly things, which, along with his possessing the appearance of a child, could assert that his nature is innocent of whatever afflicts his environment, and that he is the seed or symbol of something that lives on when all the rest passes away.

The life work of Zdzislaw Beksinski belongs firmly to the canon of modern art insofar as it is a reaction to the thesis of modern art, which asks us to eschew the 'burden' of determining objective significance and to delight in the joys that the art brings to us personally, however we might interpret it. We will not say that it is an outright rejection of that thesis, especially considering the fact that Beksinski had no interest in understanding the formal content of his art, but the subject matter and seeming unconscious efforts on the part of the artist transparently reveal the ongoing degeneration of the past century and the present one on several levels, so his work, like much of modern art in whatever aspect (plastic or literary, theatrical or musical), is the implicit manifestation of the European spirit in reaction to what currently occupies it. This is why much (though not all) of what is best in our era comes across like a story from Poe or Lovecraft: from the music of Black Sabbath and Tangerine Dream to the films of Lars von Trier to the paintings of H.R. Giger and Zdzislaw Beksinski, real contemporary art represents the Promethean struggle of the unconscious 'Faustian' soul to fight off the shackles of post-modern individualism and broad social discord, and phoenix-like to perhaps plant the seed for rebirth in its death. 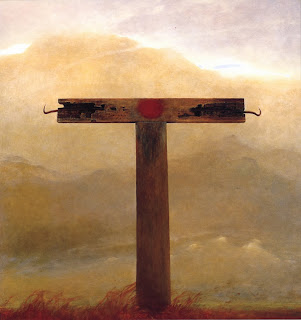 Posted by Maximus Meyer at 9:34 PM No comments: Links to this post