‘The Vegetative Universe. Opens like a flower from the earths center:

In which is Eternity. It expands in Stars to the Mundane Shell
And there it meets Eternity again, both within and without,
And the abstract Voids between the Stars are the Satanic Wheels.’ ~ Jerusalem

The city of Golgonooza is where Blake really meets Plotinus, Leibniz, and anyone else who posits eternity as an inherently internal perception, something that begins with an inner identity blossoming out into a vast network of identities that are nonetheless finite and thereby inferior to the singular original identity. Blake’s charge, then, which is once again aligned with that of Platonism, is to rediscover, or more importantly, to recreate that inner One, that comprehensive monad which inevitably leads to the All.
It is the method that Blake utilizes which ultimately separates him from prior philosophers, if only in appearance. From Vedanta to the Stoics, from the Christ to Gnosticism, we gather a more or less unified declaration to know thyself; Blake is slightly more practical than most, offering a very general means to this epistemological end. If every man is some kind of artist, as we have learned, than it certainly behooves us to discern the precise nature of our particular artistry, for therein lies the essential man.
No work of art is ever wasted, never neglected in the grand scheme of things; rather, it is dutifully collected in the city of Golgonooza, where art is the wood, brick and stone used to build everything. So, where we increasingly identify with our inner, artistic selves, we are also building Golgonooza; in this way can Blake ingeniously merge the individual aspect into the collective entirety in a kind of karmic scale which allots to every man what is properly his. This concept really epitomizes what Blake tries to accomplish on the metaphysical level, which is, namely, to subsume the merits of the individual into the integral framework of the greater whole.

‘And every part of the City if fourfold; & every inhabitant fourfold.

And every pot & vessel & garment & utensil of the houses,
And every house, fourfold…’ ~ Jerusalem

The city of Golgonooza is characterized by the ‘fourfold’ nature of its constituents, which of course means the perfection, the completion of the city; it is what the Prophets have called ‘New Jerusalem’, the place where the fallen world finally returns to its proto-Eden state. Now, this not only corroborates the view that Golgonooza is a figurative ‘ideality’, a heaven of sorts, but it also contributes to the position that such a supposedly fantastic realm is actually possible to conceive of and really ‘live’ in whilst enduring our present state of mortality.
We once more return to the notion of esse est percipi: God makes Himself immediately clear to the seeking individual, whose reality is now founded on this vision of God, which inexorably manifests itself in some shape or form based on art, which makes its return to divinity via the golden streets of Golgonooza. This is a theoretically necessary cycle that is distinctly paralleled to the cosmic paths of mankind once he has awakened himself from the dreary, slumberous natural world; and yet it is more than merely theoretical: this vision and this reality is a vigorous and endearing call to arms sent out to any of the old guard still willing to raise themselves to their former godhood, to their old thrones sitting upon eternity. 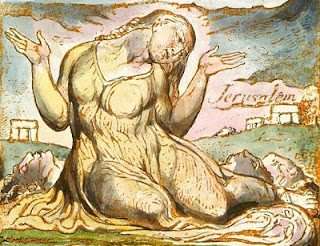 Posted by Maximus Meyer at 10:59 PM No comments: Links to this post

First of all, Blake thought that any theories of art were ipso facto null and void due to their smallness in the face of the highest species of art; the theory, which intrinsically implies universality, fails to account for the wonderful mystery that the wide array of art can oftentimes produce in the most magical, unpredictable ways. Now, having said so, we will nevertheless endeavour to understand precisely what Blake did think of art from the theoretical point of view which arises from his greater worldview…
The most obvious truth about Blake’s view of art would naturally come from something that we are already aware of, namely, that insofar as our perception of this world is limited, so too will be our artistic accomplishment; the extent of the artist’s spiritual vision dictates the extent of his mastery of the arts. In this way we can see Plato yet again re-appearing, reminding us of the mimetic function, or the impulse to imitate an already imitative object. If the object that we are wishing to demonstrate in poetic or visual representation is already a copy, it behooves us to seek out the original idea residing behind the sensible manifestation, and to portray it symbolically, viz., through the world of symbols that directly indicate the Forms above.
The vegetative state of our world is a priori an ugly, vicious picture; if we insert our own human imagination, however, our perception becomes a posteriori a beautiful and immortal thing of art. This idea that we visualize through our higher imagination is surely a part of what Plato called the ‘Formal realm’, and it is clearly manifest in Blake’s schema of symbols. Moreover, it must be known that the world of beautiful Forms is not really non-existent prior to its human visualization; it truly is eternal in both the heavenly and mundane aspects of reality, but its recognizance requires the higher human faculties of vision and Intellect to re-create according to his own particular understanding, and therefore become real to him.
In more relevant terms, we can once again succinctly paraphrase the eminent Blake scholar Northrop Frye, who supposes art to be an imaginative ordering of sense experience; furthermore, the dismal, linear attributes of the material itself is actually a hindrance to the artist, who ultimately wishes to untie all of it into a single, united form that contrarily is beautiful and revelatory. To use Frye’s own example, which really is the best possible example, Beethoven’s deafness did not at all affect his imagination; it instead assisted him in his creative efforts! And as for the ontological experience of the artistic endeavour, we will quote Frye himself:

‘The “visionary” is the man who has passed through sight into vision, never the man who has voided seeing, who has never trained himself to see clearly, or who generalizes among his stock of visual memories. If there is a reality beyond our perception, we must increase the power and coherence of our perception, for we shall never reach reality in any other way. If the reality turns out to be infinite, then perception must be infinite too.  To visualize, therefore, is to realize. The artist is par excellence the man who struggles to develop his perception into creation, his sight into vision; and art is a technique of realizing, through an ordering of sense experience by the mind, a higherreality than linear unselected experience or a second-hand evocation of it can give.’~ Northrop Frye

Although Frye is presumably speaking of the specifically artistic evolution in this passage, it clearly has wider implications, perhaps inclusive of all men. This normal imperative for the true artist is not exclusive to the artist of the plastic arts, or of music and lyric, but to all humanity. This idea is exemplified in the Laocoon aphorisms, where Blake says, ‘A Poet, or a Painter, a Musician, an Architect; the Man or Woman who is not one of these is not a Christian. You must leave Fathers & Mothers & Houses & Lands if they stand in the way of Art. Fasting & c. all relate to Art. Prayer is the study of Art. Praise is the Practise of Art.’ So every person is conceivably an artist in his own way, and therefore this dramatic undertaking of converting vegetative sight into real, imaginative vision applies to every human being.
Now that we know the ideal of any serious artist, what might the outcome actually appear as; for doubtless something that imitates divinity instead of physicality must be substantially different.

‘The great and golden rule of art, as well as of life, is this: That the more distinct, sharp and wirey the bounding line, the more perfect the work of art, and the less keen and sharp, the greater is the evidence of weak imitation, plagiarism, and bungling…’ Descriptive Catalogue

This obviously corresponds to Blake’s collective metaphysic, that of definite identities properly integrated into the all-subsuming humanity. Blake furthermore states in his marginal notes on Reynolds, ‘Demonstration, Similitude & harmony are Objects of Reasoning. Invention, Identity & Melody are Objects of Intuition. Thus, the more mathematical tools of art are found to be inferior to the more ‘intuitive’ insights, which cannot be measured quantitatively but can be measured qualitatively.
So we have discovered that Blake does not really have a ‘theory of art’ at all; or, rather, that his overall philosophical perception includes a description of artthat extends the artistic process ina  way conducive to his most immediate goal, viz., the apocalypse of self,the empowerment of sensual seeing into perceptive vision. Therefore, art itself is no longer too ‘comprehensive’ for any theory about it, but certainly becomes part of an epistemological system that actually absorbs the art complex, as well as every aspect of ‘real living’ that could possibly be endorsed by Blake’s idealistic objective. We conclude this section with another pertinent quotation from Mr. Frye…

‘All art is vigorous and controlled line-drawing: painting is drawing on canvas; engraving is drawn on copper; music is drawn on sound: whatever the medium, the imaginative impulse to conquer it is the same. All bad art fumbles, hesitates, and breaks up the line: all bad art has the disease of what Blake called “blotting and blurring”’~ Northrop Frye 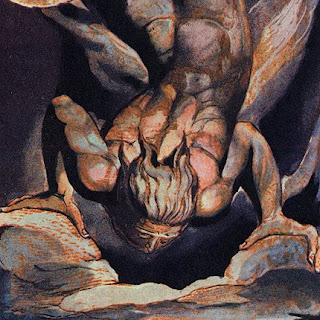 Posted by Maximus Meyer at 6:57 AM No comments: Links to this post