As every review of Silence has already said, the film is very faithful to the book; the only significant
differences I noticed were a livelier, more charismatic 'inquisitor' and that scene at the end where Rodriguez is holding a tiny cross.(1) So my thoughts are the same as my thoughts on the novel, namely that it depicts a very wretched time for Christians, and it does so without any romanticism: priests are apostatizing, laypeople are apostatizing, and they are being martyred anyway (leading to the question of whether it is really martyrdom then). The question of God's silence, his absence when so many of his people are dying for him is at the front of the film, far from being a damning look at Catholicism, as some claim, only illustrates a very painful truth. There are existential crises of faith in such times, and we don't glorify God by pretending that they do not exist.

One of the most beautiful moments of the film, however, is infact a kind of 'glorification' of martyrdom, albeit in a very tragic and awful sense. The original Japanese Catholics whom Fr. Rodriguez and Fr. Garupe meet in their search for Fr. Ferreira show fervent faith and devotion, inspiring and lending strength to their new priests. When the inquisitor comes to their village, however, he requires them to trample on the fumie, a board with an image of Christ, in order to show that they are not Christians. Fr. Rodriguez tells them that it is okay to do so, so they do. But when the inquisitor brings out a crucifix, telling them to spit on it and then say that the Blessed Virgin is a 'whore,' three of the Christians cannot do it. They are subjected to dying on crosses out in the water, where the constant waves and rising tide eventually drowns them over the course of several days. Right before the last one dies, he starts singing a hymn, a wonderful, pathetic hymn of sweet joy and brokenness that testifies to Christ's great love. It is a tribute in the traditional style to the faith of the martyrs. 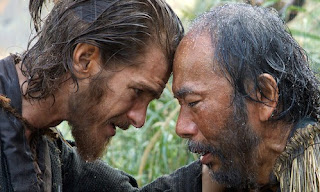 As for the apostasy of Rodriguez, on the other hand, there is no singing, no secret reserves of strength enduring whatever the gentiles can throw at him - instead there is an engima. Is that voice that tells him to trample really God? or is it his conscience, or Satan? The voice later tells him that he was not silent, that he spoke through the suffering around him, so I am not one of those who think that this was Satan speaking now. But then there is the problem of trampling on the fumie, and how the cock crowed three times afterwards, likening Rodriguez's act to the betrayal of St. Peter. How can God tell Rodriguez to do something and then still call it betrayal? This is a highly ambiguous moment, of course, and leads to deep thinking in the seemingly hopeless effort to resolve it. Are we too weak to do God's will? does he forgive us for our failure? can it be a 'lawful betrayal' in that it was divinely commanded? do the lives of other human beings trump our faith? is it truly selfless to surrender our God in order to save other men and women? is that what Christ would do?

The best way to perceive these questions can be found in Kichijiro, the scraggly Smeagol figure who persistently betrays his fellow Christians and then confesses each time in order to be forgiven. One of the most profound lines of the novel reads: 'Christ did not die for the good and beautiful. It is easy enough to die for the good and beautiful; the hard thing is to die for the miserable and corrupt.' Rodriguez says this, he is aware of this, and yet he still treats the treacherous Kichijiro as vile, as unworthy of being part of humanity, and in so doing Rodriguez reveals that he is human himself, that he is not like Christ, that he is incapable of dying for the miserable and corrupt.

Kichijiro himself knows that he is a vile man, that he is weak, hence his invariable return for confession after every sin. He also asks the poignant question why he has to be born in such a time - many other men like himself are born in free, Christian countries and live good, Christian lives. But would they be so good if their faith was tested like Kichijiro's? It is unfair, he says, to be born when his weakness becomes a curse, and not when it would be a blessing. We are meant to identify with him in a way, wondering whether we, in our safe, comfortable, and (supposedly) Christian society where we are free to believe whatever we want, would be able to do better than Kichijiro, whether we would have the stuff for martyrdom or for betrayal and apostasy.

Rodriguez, until his own fall from grace, neither understands him nor takes pity on him. He treats Kichijiro as an enemy, giving him confession almost against his own will. This is a crucial point in the drama, because Kichijiro represents how we might look to God if he had merely human eyes. We continually sin against him; we betray his name; we say we will do good but we do evil; we abuse his teachings for our own ends; we sin and we sin again. If God were Rodriguez, he would be right to regard us as contemptible creatures, unworthy of salvation. But God is Christ, and Christ died for the 'miserable and corrupt.' In his trampling on the fumie Rodriguez appears to Christ as Kichijiro appears to Rodriguez - and Christ forgives him for it.

Fr. Garupe came the closest to being like Christ. Unlike Rodriguez, who permitted the Japanese 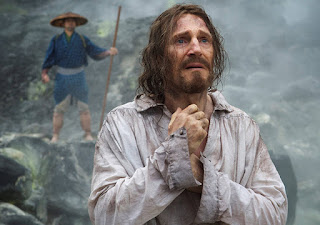 Christians to trample on the image of Christ, Fr. Garupe exhorted them not to, since they forfeit their relationship with Christ in doing so. When he is captured along with a group of peasants, we are told that the peasants have already apostatized, but will only be set free if Fr. Garupe apostatizes as well. The priest refuses to give in and swims out to the drowning peasants, dying as he tries heroically to save them. He was aware of their apostasy; he was aware of their weakness, their betrayal, but he died for them anyway. Like Christ, Fr. Garupe died for the miserable and corrupt. Even the Japanese samurai says that 'at least [Garupe] was clean,' whereas Rodriguez has 'no will.'

The theological validity of forgiveness for apostasy aside (we would have to go deep into the Donatist controversy), this film speaks to other powerful human and Christian themes, including both our understanding of God's will when everything points to its absence and the frailty of human nature. God speaks to us in obscure ways, and Silence makes the strong case that he speaks to us through our suffering, that he is right beside us when we suffer; Christ is the archetype of selfless suffering, and so is automatically joined to us when we share in his pain, especially when we suffer for him.

In Kichijiro we see fallen man in all his ugliness, his cowardly and vicious nature laid bare. Who can love a wretch like that? And yet it is always Kichijiro who cries out for forgiveness after, who feels the burden of sin every time he enters into a state of sin; it is Kichijiro, more than any other character, who acknowledges his weakness, and asks sorrowfully for confession. If Rodriguez and his apostate teacher Ferreira represent the idea that any man may fall, Kichijiro represents the idea that all men may repent, that all men yearn to repent, and that it is the only way for man to escape the sin which is native to him. The human condition is a series of spectacular falls, but it is also a redemption tale in which our quest for forgiveness ultimately leads to salvation through Christ's unlimited compassion.

It is perhaps best to think of this film as one that asks questions rather than answers them, allowing the viewer the freedom to meditate and ponder on the content of his own faith. Understood in that light, given its intense imagery and honest insight into deep moral problems, this film is yet another Scorsese triumph, and well-worth viewing for any Christian. 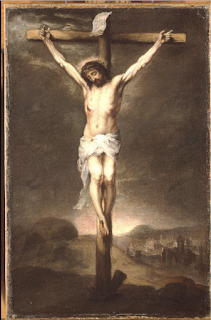 (1) Bp. Barron astutely pointed out that that image represents just what 'the powers that be' want our faith to be like. When our faith is 'deeply interior,' hidden from the world, ineffectual, innocuous, it makes no difference to the external culture; anti-Christian civilization does not care what our faith is, so long as our faith lets it do its business. This is as true for the Japanese pagans in the 17th Century as it is for the secularists today, who are all too happy to leave us be if our spiritual life is secondary to our life in their secular culture, which is, sadly, what the faith of the director of this film has been reduced to.
Posted by Maximus Meyer at 7:04 AM No comments: Links to this post